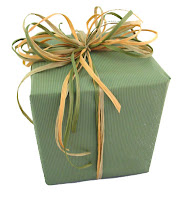 All of us have received a gift at one time or another. When you receive a gift, it can be rather humbling, can’t it? Don’t you sometimes feel like you don’t deserve it? This is why people often exchange gifts, because if they know they will be given a gift, they want to give the other person something in return. But when you have not done anything to deserve a gift, in fact even done something hurtful to someone and they offer you a gift, it is humbling.

I want to talk to you about a gift. It’s the most important and the most valuable gift you will ever receive. It’s the gift of God’s grace.

There's a clear distinction in Scripture between faith and works. We know that we are saved by faith alone through grace. The early reformers called this sola gratia in Latin. As Paul said, "For by grace you have been saved through faith; and that not of yourselves, it is the gift of God; not as a result of works, so that no one may boast." (Eph 2:8-9).

That English word gift in this verse of the Bible comes from the Greek word δωρον, doron, do'-ron, which means a present; specifically a sacrifice, a gift, or an offering.

You see, it's not by works, so that no one can boast. If you can work for it, then you can boast that you did it yourself. But it's the gift of God. It's based on His unmerited favor toward you. We need to really get that into our spirit.

We begin our walk with Jesus the moment we put our complete confidence and trust like this in Him. It's at that moment that we are given the gift of God's righteousness. We are justified. It happens instantly, and we are completely forgiven. It's not something we can work for or try to earn.

When someone gives you a gift, you simply receive it. If you don't receive it, then it will remain in the hands of the giver. God's righteousness is a gift.

Our Best Efforts Are Just Like Filthy Rags
Let’s stop and think about that for a moment, because these days righteousness is not something we normally think or talk much about. To be righteous means you have done no wrong and you cannot be blamed for anything. Yet the prophet of God cried out: “All our righteous deeds are like filthy rags!” He said, “But we are all as an unclean thing, and all our righteousnesses are as filthy rags; and we all do fade as a leaf; and our iniquities, like the wind, have taken us away. (Isa 64:6).

That’s really how God sees it. I mean He is truly righteous – completely without sin. And when anyone who does not know Christ tries to do the right thing, he is attempting to be righteous. But because of our sin nature, even our good deeds are all like filthy rags. Would you take a bag of stinking, dirty garments and dress up in them before you go to stand in the presence of a president or a mighty king? Of course not! Then why would you dress up in the filthy rags of your own righteousness before you go to stand before the holy and righteous King of all kings – God Himself? Yet isn’t that what we do when we think we will gain acceptance from God based on our own good works?

The apostle Paul had every reason to consider himself righteous before he came to know Christ. He said it this way: "I myself might have confidence even in the flesh. If anyone else has a mind to put confidence in the flesh, I far more: circumcised the eighth day, of the nation of Israel, of the tribe of Benjamin, a Hebrew of Hebrews; as to the Law, a Pharisee; as to zeal, a persecutor of the church; as to the righteousness which is in the Law, found blameless." (Phi 3:4-6)

Paul was considered blameless by men according to the Law. But when he came to know Christ, who is truly righteous, he saw his own sinfulness. He exchanged his dirty rags for the righteousness of Christ. He counted all those great things he had once done as a total loss. "But whatever things were gain to me, those things I have counted as loss for the sake of Christ." (Phi 3:7)

He took it a step further than that. It was not just those things that he counted as loss, but ALL things. He said: "More than that, I count all things to be loss in view of the surpassing value of knowing Christ Jesus my Lord, for whom I have suffered the loss of all things, and count them but rubbish so that I may gain Christ, and may be found in Him, not having a righteousness of my own derived from the Law, but that which is through faith in Christ, the righteousness which comes from God on the basis of faith." (Phi 3:8-9)

Paul said that he considered all things from his past legalistic life as rubbish. The actual word he used in the Greek means animal dung. That's pretty extreme, but that's what the Lord expects us to do. Don't put any confidence in the things you have done for God. But like Paul, put your confidence in what Christ has done for you. Then like Paul, you will be found in Christ, in a relationship with Him, not having a righteousness of your own, but having the righteousness that comes from God. This righteousness is given to you on the basis of faith.

Get Credit for Something You Didn't Do!
You see, Jesus is perfect and without sin – perfectly righteous. He is God. And when He died on the cross for you, He took the punishment for you and me, which we deserved. When you believe in Jesus Christ, God’s Son, God actually gives you credit for His righteousness. That’s right. You get credit for something you did not do or earn!

The apostle Paul put it this way: “Now to the one who works, his wage is not credited as a favor, but as what is due.” (Rom 4:4)

We can all understand this. When we work, we get paid a wage. So we get exactly what we deserve. It’s the same spiritually. If you want to work to obtain righteousness, you will get what you deserve. Since no one will be declared righteous before God based on their own good works, then those who live this way will not please God. They will stand before God dressed in filthy rags.

But the apostle Paul goes on to say: “But to the one who does not work, but believes in Him who justifies the ungodly, his faith is credited as righteousness.” (Rom 4:5)

Isn’t that wonderful news? It’s the person who does NOT work to obtain righteousness that obtains it. It’s the one who simply believes God, who justifies ungodly people. He makes ungodly sinners righteous! The one who believes in Him receives credit for his faith. What credit does he receive? The credit he receives is righteousness!

God wants to give this gift of righteousness to you. He wants to give you credit for something you didn’t do. The way I explain this to my children is like this. Imagine if I did your chores for you and then rewarded you with a gift for a job well done! That’s what God desires to do for you. But you have to receive it by faith. Everything is by faith. But it's not mere mental assent to the truth. You must step out on your trust in Him and take action based on your confidence that you have received this gift from God.

Like the Criminal on the Cross
I'd like to give you one last illustration of this wonderful gift of grace. When Jesus hung on the cross between two criminals, one of them insulted Him and mocked Him. But the other man was humble and repentant. He acknowledged his own sin and accepted the death penalty as a just punishment for what he had done. He knew he deserved it. He earned it. But he recognized Jesus as the King who would inherit a kingdom. He acknowledged the righteousness of Christ by saying that Jesus had not done anything wrong. He cried out to Jesus, asking Him to save him.

Here's the passage: "One of the criminals who were hanged there was hurling abuse at Him, saying, 'Are You not the Christ? Save Yourself and us!' But the other answered, and rebuking him said, 'Do you not even fear God, since you are under the same sentence of condemnation? And we indeed are suffering justly, for we are receiving what we deserve for our deeds; but this man has done nothing wrong.' And he was saying, 'Jesus, remember me when You come in Your kingdom!' And He said to him, "Truly I say to you, today you shall be with Me in Paradise.' "(Luk 23:39-43)

You see what Jesus said to the second sinful man, the one who repented? He said that the man would be together with Jesus in Paradise that same day! That's grace! That's what it's like when you are given this gift of righteousness from God. It's instant. That criminal died there that day and never had a chance to do one good work for the Lord. He never got circumcised or baptized either. He was simply saved by grace through his faith in Jesus. He got credit for the righteousness of Christ at that moment.

Putting it All Together
Maybe you started off your walk with God trusting in His grace, but you have returned to trying to earn it by your works. Just quit that right now. It’s a waste of time. Our works should simply be evidence that we have believed in Jesus Christ, and not something we are still doing to try and earn His love. Just repent of that and ask Him to forgive you for trying to obtain righteousness yourself through legalistic acts. Then rest once again in His love and stand in his grace by faith alone. Accept it fully as yours, though you don’t deserve it.

Or maybe you have never accepted this wonderful gift from God. If so, you still have time. Now is the time of God's favor. Now is the day of salvation. Receive God's gift of righteousness to you today.

Attribution notice: Most Scripture quotations taken from the NASB.

Author's note: If you enjoyed this post, you may also like the other posts in this blog available through the Home page of this blog. You may also access my complete blog directory at Writing for the Master.

Do You Want to Know Him?
If you want to know Jesus personally, you can. It all begins when you repent and believe in Jesus.  Do you know what God's Word, the Bible says?

Please see my explanation of this in my post called "Do You Want to Know Jesus?"

Len Lacroix is the founder of Doulos Missions International.  He was based in Eastern Europe for four years, making disciples, as well as helping leaders to be more effective at making disciples who multiply, developing leaders who multiply, with the ultimate goal of planting churches that multiply. His ministry is now based in the United States with the same goal of helping fulfill the Great Commission. www.dmiworld.org.
Posted by Len at 5:20 AM